Nothin' Doin' - When They Need You 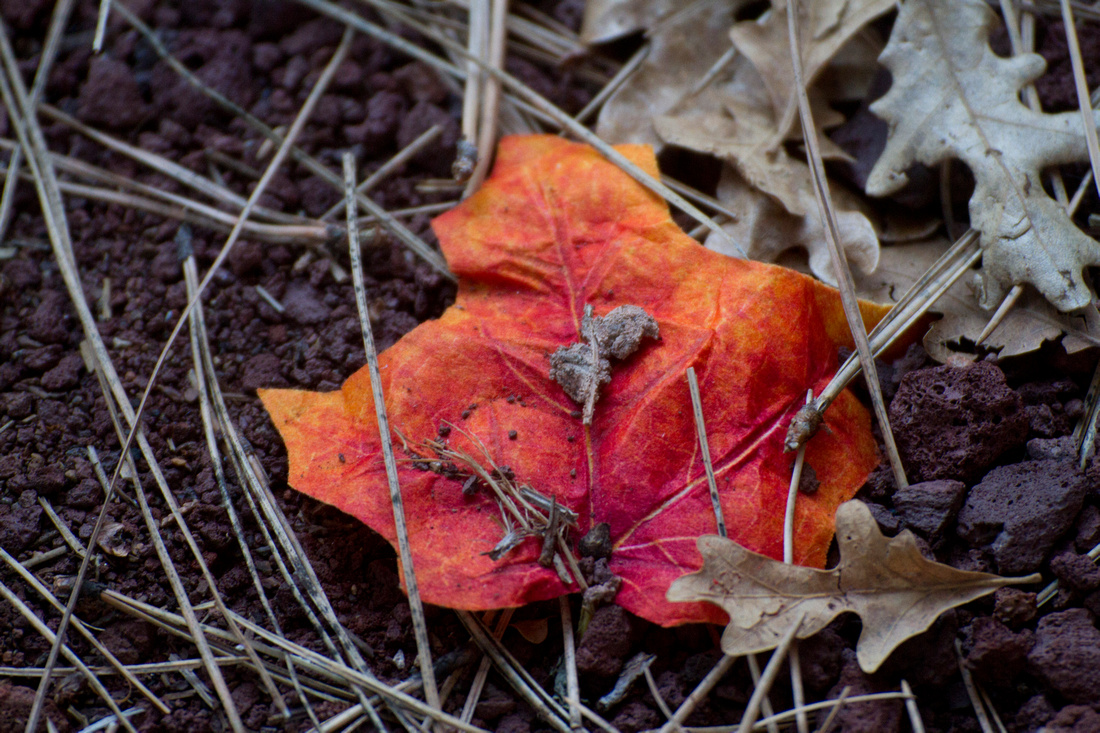 Nothin' Doin' -  When They Need You

The struggle to identify, or pinpoint how writing and reading enhance an ability to write is a mystery. Does one surrender the question and go with the correlation, and write?  What?

Therein lies the quandary. All writing from this brain has been focused on perception. My perception, interpretation, and focus of how those external events cause, shape or construct memories or help form whatever meaning has flowed onto any page.

It looked so real I couldn't believe it kept its orange/red color for so long. I finally shot it among the many real leaves that had long ago lost their color. I marveled at its ability to remain so colorful until I picked it up.

It was fake. A leaf from some table decoration, or fake fall wreath, or some such festive artifact. I had been hoodwinked by a manufacturer. A smile creased my lips, which launched into a belly laugh. I kept the leaf for some time as a reminder; everything is not always as it seems.

Many of the writers' I've read and enjoyed seemed to have had some traumatic experience or two thrown into their lives that pushed, pulled, shoved, or kidnapped them into writing. Which of course shaped, translated, and transformed their writing into comprehensibly meaningful pieces worthy of reading more than once. But not all.

Some began way before me and could pull stories out of suggestions by others and write brilliantly crafted short stories, essays, or thoughts worth emulating. Which means there is no one path. No one method, or strategy, or a single formula one must follow.

Our own path. Whatever that is, and wherever it takes us. There are occasions when the well dries up, the ink needs replenishment, or there just isn't enough mind left in the brain to write anything, for personal or possibly external reasons.

What is the point? Don't ask me, I'm just writing it as it comes, and going wherever it leads until an endpoint shows up as either a 'Dead End' sign or I run out of space, ha...

You cannot run out of space on a computer, there is always more. And that is a compelling body of information indicating a desire, need, or motive in a continuing effort to write. To write any and all emotional fluctuations of momentary need for the persona of self.

Another pointless essay looking more like cotton candy with every keystroke. You know cotton candy. That colorfully light, attractive, and sweetly smelling ball of whiffy-looking clouds on a cardboard stick waiting for its first taste.

Yeah, me too. You grab a bit of it, pull off enough to stuff in your mouth, and as it melts sweetingly slowly, you realize it's more air than substance. Oh, my, sugar never tasted so good.

This is the part where you ask yourself: "What did I just read?" Don't ask me, I'm just writing it blah, blah, blah...

To the meat of this writing...

One of the strongest lessons I've finally learned in a concrete manner recently occurred when the moment of decision arrived about what I was going to do about a friendship. Be with friends when they need you. This one opportunity may not come again for you with this person.

My friend, Jo Baeza, an author, and a historian of Arizona died in the middle of November. I had known for some time of her being critically ill. I took the news well only because I knew it was coming.

I used to live about ten minutes from her place in Pinetop, AZ. While I was still living in Lakeside, Arizona, I visited her when I could. Just a stop by and chat time.

Jo was famous in Arizona for her writing. She had many friends, was a designated culture keeper of Arizona due to her books concerning its history. She had also written many articles and stories about the state and its people. Being a culture keeper was quite an honor.

Jo, on the other hand, never said much about it. She was glad to have written the books and flattered that people thought so highly of her writing. She never bragged about it, or brought it up in conversation unless someone mentioned it. She just liked to write about things that interested her.

I'd stop in to see her once or twice a month, depending on my schedule and her doctor appointments, tests, and certain issues with her illness. Her house was old but sturdy. It was a warm, comfortable, welcoming space, like that cabin you always wanted as a retreat from the world where you felt safe, content, and at rest.

Jo's serious decline started after her last dog finally succumbed and took its final rest. The cats too departed but Jo found a stray, and then another, and these two hung around loosely, like hangers-on who wanted her friendship but weren't quite sure if they could come inside.

With her dogs gone and the cats no longer coming around except for these two new strays, life took the fork in the road we all take one day. Her illness crept into her life slowly, surreptitiously, like Autumn; one-day blue skies and bright trees, and then leaves changing color, fading away into ground.

She knew death was coming. She did her best getting ready for it and wondering how much longer time would favor her presence. People began coming over, keeping her company, doing her shopping, preparing meals, just being with her making sure she had what she needed.

During this time my situation changed. I left Arizona and moved back to Wisconsin. As it happened a grade school friend and I met again, renewed our acquaintance, and forged a new friendship.

My partner Sue is a retired nurse. She has been in the trenches of nursing in Madison, WI., while I had been exploring other areas of the U.S. camera in hand, on hip, in newspapers, and such. Sue had been in the clutches of nursing people back to health, serving them with a smile, and with a keen awareness of their ailments, and how to minister to their needs.

This is something not taught in nursing school. Picking up on what ails people can be written in a chart, but knowing how to spot their needs while they are in the throws of their malady takes the right kind of analysis. Sue has that ability, in spades.

This came into play when I was informed of Jo's worsening condition. I had a choice to make. Go to the memorial service after she passed or visit her at the most optimum time; right now.

Sue's experience with those with limited time left to live provided the best response. Sue had cared for many patients who ultimately left the hospital on a gurney, not in a wheelchair. Sometimes she cared for them at home and they left their homes in this manner.

She had said goodbye to more people than most of us ever will. Visit her now while you still can. She didn't need to say it twice.

On the last three days of October, I flew back to Arizona. While in the White Mountains of Arizona I stayed with a precious friend, who in my eyes, cared for Jo as if she was his own mother. We all need at least one friend like that.

Time with Jo meant a lot to her. Always subdued in her presentation sometimes it was hard to know how she felt unless pushed too far. While still living in Arizona and visiting her our conversations centered around our ties and times at the Independent (White Mountain Independent newspaper).

These talks always spurred other topics; friends we knew, and some she knew, and some I knew that each of us knew separately. Cats, dogs, apple trees, and history, all kinda mixed together in our talks, flowing one to the other as the sun arched over and sometimes down the horizon.

Though our horizons spanned many topics, our mutual love of writing never spilled into each other's laps in a confining manner. We never talked about our writings. Because, oh because, Jo valued our friendship and decided early on this might be a wedge of resentment or an uncomfortable space between us.

It never entered our space. Ah Jo, you of little compliment, which made them all the more precious to hear, know and savor, only purchased your words when they held a full meaning of what you wanted to say. Thank you for your wisdom and generosity of sparse accolades.

Sue knew the time to see Jo was in these moments of life, when we sat together, sometimes in a light silence, sometimes making her more comfortable, and sometimes going back through the years and how we managed to get this far along and still find each other welcoming friends.

Having that last conversation was a fitting goodbye. It was stoic, it was short, and like a cattle, brand seared our hearts with the burn of friendship. It sat well on her mantle in the living room over the fireplace, and held the rest of her days with peace of mind, knowing loyal friends are there when you need them.

When your friends are laid up and dying, take Sue's advice; visit them now, while you still can. Do not wait and think you have time, you don't.

Find the courage, take the flight, hug them, hold them, tell them how you feel, talk about all your best days together, because these are their final days, there aren't anymore.

I miss Jo. She is always in my mind alive and well, and having our conversations. She will always be alive in my heart.