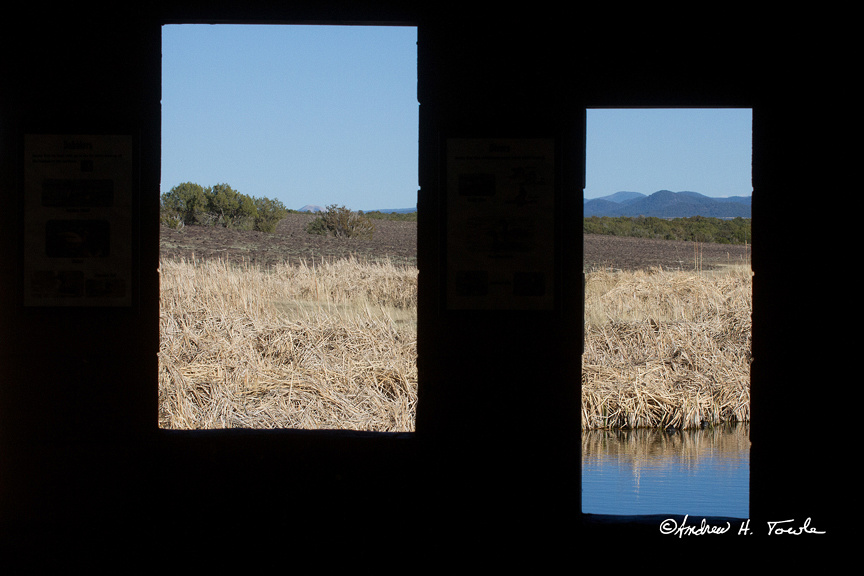 03192016PintailLakeFramed028ATwpPintail Lake Framed There is a brick information building at Pintail Lake called a blind with eight or nine windows for bird watching. Only got two in this shot.

The urge to write, to express the self has been inside since high school when I discovered the joy of the English language. Having only my native tongue for examples, it occurred to me early that writing, words, and creating unique sentences was fun, interesting, and an artistic expression. I have not lost that joy.

So far. English can express such confusing and consternating sentences. For example, the word meet, when spoken but not written has different meanings depending on the context. There are many, many examples of this.

But writing in English, because of the many meanings words acquire, display, and can be used for, it is always a challenge to write, to express in a creative way. There are many writers who put their ideas, stories, and findings on paper for others to read, and the great joy in writing is that everyone can write the same topic and say the same things but with a difference that is as individual as the person writing.

For example: write a sentence with the word shoes, as the subject and a verb that means motion. The flame-decorated shoes strolled aimlessly down a tattered sidewalk of dreams. Shoes meant for others tromped the battlefield in a disgusting display of revenge. Flip-flopping down the steps her make-shift shoes broke a thong, as she tumbled the steps to a major disaster. There are at least 26 different verbs one can use to write a sentence like that. And the ideas expressed go into a realm of creative energy of anyone who can write a sentence.

The point: the point is that language is a universal and completely expressive medium for anyone, IF, and WHEN, they obtain the courage to communicate their ideas through writing. No one can ever take from writers their creative spirit of writing unless they succumb to fear.

This writer knows as fear has come upon me more than once. Fear of losing friends, fear of exposing thoughts so personal they can drive others away, ideas so remote and out of the mainstream, one wonders how they even entered this mind in the first place.

For example, while splitting wood to heat our home many years ago, I thought: What if the ax slips and cuts my right hand off? What will I do then? I’ve tried writing with my left hand and my writing is terrible. I feared I would have an accident and hurt myself. I thought about an accident; I thought about fear and what can happen when one is not careful.

About ten years ago, the ax did slip. The backside of the ax was a hammerhead, which crushed my index finger. There are three screws in my right index finger holding the bone together. Be careful what you think. Fear can manifest itself when you least expect it.

One avenue out of fear is to write your fright out of your mind. In the process, people close in friendship may be lost, even family, because including them in the writings and what you think about may be too much for them to handle. The only good writing is honest writing, and that leads to a narrow and harrowing path for those who express their deepest thoughts.

An aside: Word for the day; renascent - being reborn, springing again into being or vigor.

Yes, indeed. My current fear is writing a short story about someone I once knew. I will refrain from writing this story for years. But once the time is ripe, it will spill out of me in a torrent. It will be complete, it will be well written, and it will never occupy my mind again. Writing about getting sober was like that. It lived in a room in my mind for more than 20 years. Then it got written and lifted a weight off my shoulders that has never re-visited.

Some stories are like that. Some life events are like that. They churn around inside for decades, then one day, poof, out march the many words of this event and place themselves in sacrifice on the page, never to engage the mind again, as they have escaped their prison and reside in a story, an article, an episode.

Using the urge to write and express is an agreement; once entered into, and learned well, is like breathing. This creative process, this love of language, and the use of words is a fire that must be fed until no combustible energy remains.