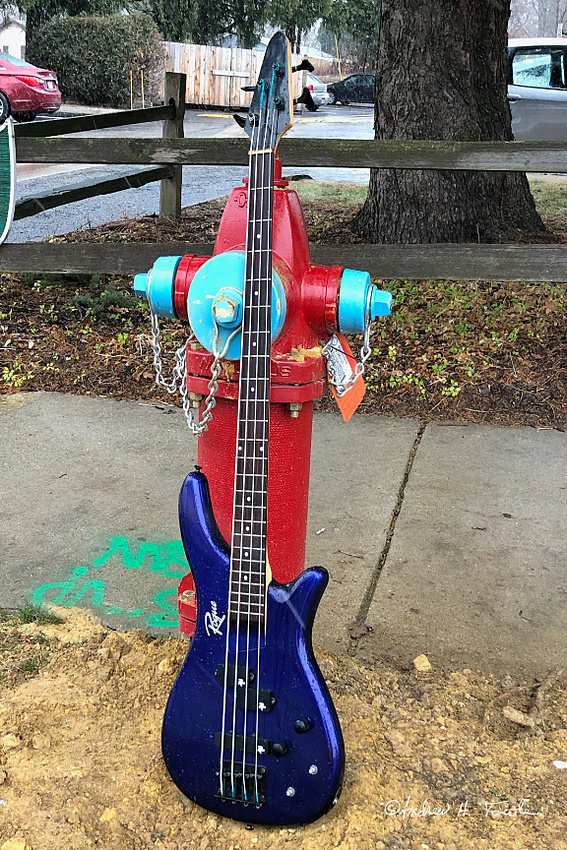 On December 11, in the early afternoon as I was leaving my apartment building one could not help but notice the electric bass guitar leaning against the fire hydrant near our driveway entrance. Yes, of course, my iPhone was used to record the unexpected circumstance. The guitar remained in place until sometime later in the night, perhaps the early morning.

Questions? Absolutely. How could there not be questions?

Who? Who knows? A lost guitarist? A vengeful friend? A jilted lover exacting a price? Perhaps a drug-influenced musician on a rant against the music world because of a slight, or a fateful rejection, set it there and walked away.

Maybe someone was moving and in their haste to pack up the guitar was forgotten in the rush of some other crisis. So many possibilities. All of them true.

The following morning I thought of the guitar early after rising and went to the entrance and glanced out the thin stripe of a window to the left of the door. The blue bodied instrument with "Rogue" in script at the end of the fretboard on the body of the guitar was gone

I sighed. I was disappointed. I was hoping it was still there and thought I might get a glimpse of someone jumping out of a car in a rush and quickly snatching it up and driving off with a whoop and a holler.

No such luck. Just the fire hydrant, the settling snow, and the cold wind pushing flakes around in a swirl. At least I had a clear image of this mysterious guitar event. Speculation ran rampant in my mind.

What a short story. It has possibilities. What is my favorite tale in this happenstance event?

Turn down the lights. Close your eyes. There is a woman at the crux of this tale.

Across town near Milwaukee Street and Stoughton Road, there is a cowboy bar. Really, in Madison, Wisconsin. No names, please.

Every Thursday and Friday night the bar hosts a local group of musicians of any flavor who have the time and the inclination to play there. December 10, a Thursday, The Saddle Back Band took to the small stage and entertained what passed for a crowd in a night of a heavy snowfall.

The bass guitar player, heavy with long hair beginning to show white, had one too many beers between the first and last set of the evening. His girlfriend was flirting with a member of the audience. At the table closest to the band.

Of course, the bass player started out with a few verbal insults, to her and the man she was toying with. The words became shouts. The shouts turned a corner of aggression and the drunken bass player was soon knocked down and out, laying across the table, wet with spilled drinks.

You know the rest.

How about this? The Saddle Back Band has four members in the group. A lead guitar, also the lead singer, a rhythm guitar, a bass guitar, and a drummer. The lead, the rhythm, and the drummer were waiting at the cowboy bar for the bass player.

He was late as usual. It was his trademark. It's why the group usually told him their gigs were an hour before they really were. Most of the time he came on time then.

Snow was beginning to fall. They were getting impatient. The drummer was a practical joker. He suggested after the gig was over the lead guitar and the rhythm should distract the bass, and he, the drummer would sneak the bass guitar out of the room and hide it somewhere.

But where? said the lead. Why not make it a scavenger hunt? said the rhythm. Great idea, said the drummer.

Let's add a little twist, said the lead. Let's each pick a place to hide the guitar around town somewhere outside. Do not tell where you want to hide it. We'll each have a place in mind.

Then what? said the rhythm.

The drummer gave a loud Yee-ha! as the rhythm and lead shouted and laughed in unison. Thus began the roaming scavenger hunt of a bass guitar. I wonder where that guitar is now?

Olbrich Gardens? Owen Conservation Park? The Epic Campus? The bust at the end of Henry Mall on the UW campus? Oh my, the possibilities are endless.