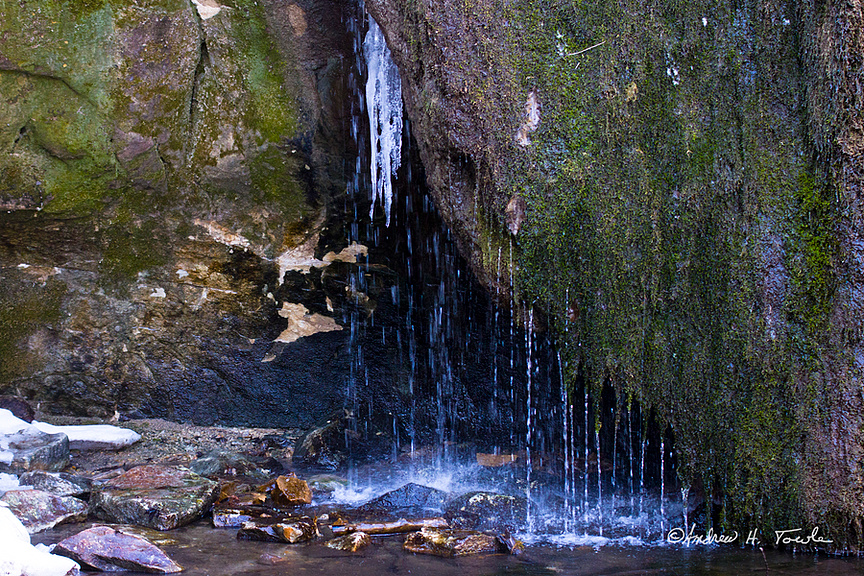 Some time ago, the memory of when escapes me, I became intrigued with the waterfalls of this state. I had no idea WI has so many until I typed in a search on the internet. More than 100. Wow.

How cool is that? I decided to spend this spring, summer, and fall embracing these natural wonders. Stephens Falls was the first, as it was also the closest.

It is located in Governor Dodge State Park just north of Dodgeville, WI. on State Highway 23. Driving from Madison on Hwy 151 it is 42 miles west, and a few miles north on Hwy 23.

Take the Hwy 18 exit off of Hwy 151 at Dodgeville, and look for the Hwy 23 signs north. Governor Dodge State Park will be about a mile and a half up the road on the right.

Saturday, March 6, 2021, was a great sunny spring day with nary a cloud in the sky and only a slight breeze. The small parking lot near the waterfall was almost full, but people were leaving in twos, and threes, so getting a space was easy.

Getting down to the waterfall took an unexpected turn. The path from the road into the woods was slushy, and a little slippery. A sign of things to come.

As I approached the woods a young man coming from the waterfall observed me with a camera and began shouting, 'Take my picture! Take my picture!' I ignored him. He stopped asking and continued on his way.

I shot a burst, lowered my camera from my face, and shouted 'Gotcha!' He was one happy fellow. Unexpected moments yield some of the best images.

The path changed from open field to close woods with a safety rail along the edge of the cliff leading to the waterfall. Looking down I heard gurgling water and saw a family of three, mom, dad and little girl coming up the path holding on tight to the metal pipe railing. Oh, oh, a slippery slope of icy natural stone stairs was in my immediate future.

It was a warm sunny day, and I thought gloves or sturdy hiking boots were not needed. I was ill-prepared for the final leg of this shoot. Having never been here before I did not realize it involved a descending staircase covered with winter's deviously slick and slithery ice-coated steps of stone.

I took the least frightful path and slid down the steps, embracing gravity but holding on to the cold iron pipe railing with a chokehold grip. I fell at the end of this slimy ride but grateful to make it down safely.

My hands were cold from holding onto the pipe railing, so I stopped at a nearly flat area and surveyed my surroundings. The water flow was a mere trickle. Sort of like a sprinkler with low water pressure.

The area around the waterfall is shaped like a softly rounded wide 'V' with a small stream barely moving along a southeast direction away from the falls. The stone walls encompassing the waterfall have frozen areas of water on either side.

Observing these areas it looks like water was flowing in a rush down the walls when frigid air suddenly froze them in place. It was like stop motion one sees in the movies. I found it quite surreal, and wonderful to behold.

There were several patches of numerous icicles dripping hurriedly onto the rock bed of the stream. There was a large overhang near the waterfall where I was able to stand under it and take a few images of the icicles from the backside looking out toward the stream and other rock walls.

I was there for nearly an hour, but other small groups of people began arriving and I knew it was time to leave. But first, I had to wait until no one was coming down so I could ascend. Now it was me against gravity and the slickest iciest stairs ever.

I watched an older couple coming down the steps. They were seasoned winter hikers. They had ski poles and crampons on their hiking boots. They wore light but protective clothing in anticipation of sudden movements they might need to make.

It took some time but I wrangled my way back to the top without falling, sliding, or breaking any part of my body. The cold pipe rail was not so cold going up. I was grateful for that.

A man waiting for me to clear the path asked me if it was worth the pictures I shot. I said the most exciting part was getting back up the stairs. He and his partner laughed out loud.

When those two men reached the bottom I shouted down to them, and yes it was worth every image! I took a few shots of the path with all those muddled and mushed footprints in the snow leading to and from the waterfall. It was a small indication of the number of people who came here to see this frail natural wonder of this part of Wisconsin.

Click the link below to view Stephens Falls Gallery