Easter Eggs and Other Treats 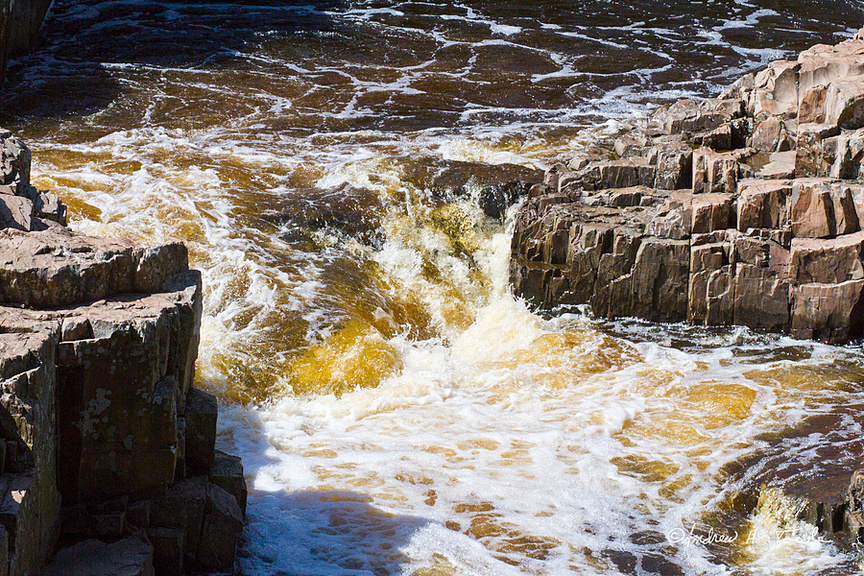 Easter Eggs and Other Treats

Last weekend Friday,16, April, was the beginning of a three-week delayed trip up to the Dells of the Eau Claire River. When I first mentioned this to my friend Dave Keeffe, he was excited for us to explore some wildlife areas he has been going to for some time.

In the middle of Friday afternoon, I loaded my gear and took off to Wausau. Driving up I thought about how much had changed on the drive up to Wausau from the time I was in high school at Newman. Hwy 51 is now I-39 and four lanes all up and beyond Wausau.

Back then it was a two-lane highway, though not much traffic except around the various holidays. I wondered back then if I would ever see the completion of a 4 lane highway to central WI. Asked and answered, some 30 or 40 years later.

Linda and Dave greeted me warmly when I arrived and we discussed what was on all of our minds, food. We decided on curbside pick-up at Sconnie's, just down the road. Dave and I hopped in his van while our takeout was being readied, and went to a place he has been frequenting lately because of the Eau Claire River water flowage.

It was near Schofield Dam. Keeffe parked and we turned our cameras on, checked the light for metering purposes, and strolled over to the river. A few seagulls were resting on a log and four Great Blue Herons were fishing upstream, though too far away for any decent shots. 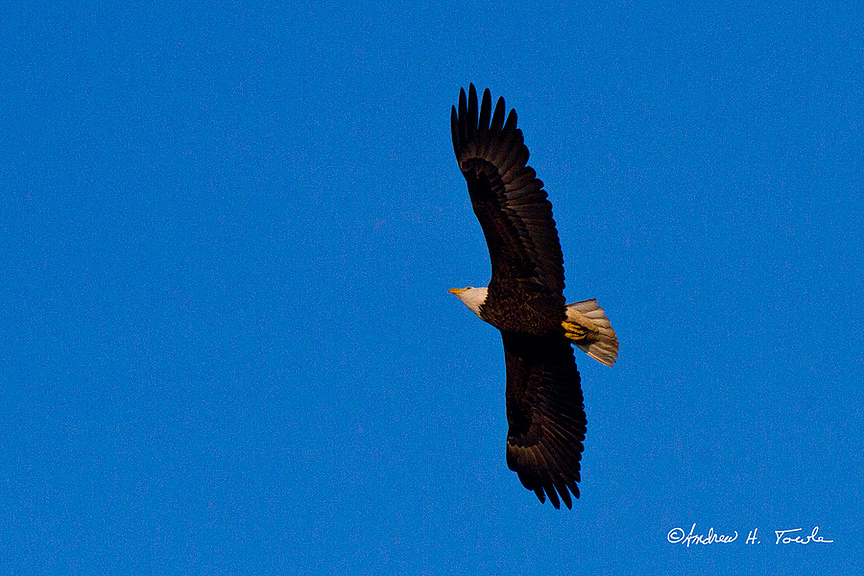 An eagle decided to check us out, came our way but remained what seemed to be too far out of range. We fired off some shots anyway. Sconnies called to establish the cost for our separate meals but phone reception was poor, so we took off for the parking lot and waited for our food to be delivered curbside.

After our meal back at Linda and Dave's house, we sat around the dining room table and discussed our families for some time. We also discussed the various antics we have been up to, our assorted dysfunctions, and life in general. Dave put some of his photos up on their smart tv and we talked about them until we realized our bedtime had caught up to us.

In the morning we said goodbye to Linda as she was heading up to Lake Superior with a friend, and we headed out to a place called Steinke Pond. It is a wildlife area and a nesting place for migrating birds such as Canadian Geese, Sandhill Cranes,  Great Blue Herons, Mallards, Pied Bill Grebes, and many other birds of note.

Steinke Pond is North and East of Wausau and closer to Antigo than it is to Wausau. It is a great place for the kind of shooting Keeffe and I prefer. We left early enough in the morning so few nature lovers were out and about.

Every time we heard a strange call, we stopped and listened. Keeffe identified some of the calls. As he has been out and about a lot he has been able to identify many of the birds. I was impressed. 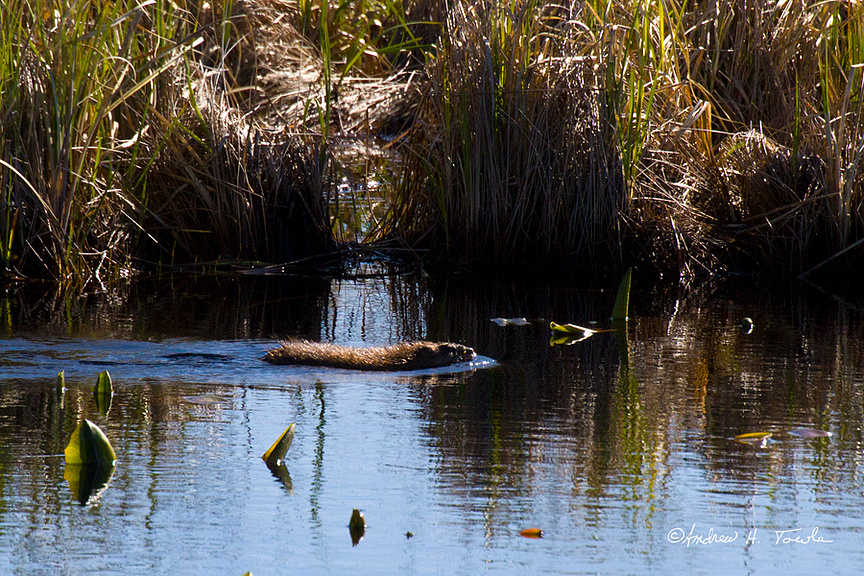 We managed to spot a muskrat, took a few shots, and moved on. Those creatures are pretty fast in the water. Bigger than I expected too.

Being so far out, and away from a populated area, Steinke Pond's only sounds were bird calls, the wind, and an errant plane or two. Keeffe pointed out a two-story observation platform, and we took a short rest there. A chill wind kicked up while we were on the platform, and we returned to the path leading out.

We passed an elderly couple on our way back to the small parking area and Keeffe engaged them in a short conversation and pointed out the best place to spot two different Sandhill Crane nesting areas. He wondered out loud if they would see anything at all. I mentioned probably not.

The highlight of the trip, Dells of the Eau Claire River, is almost directly South of Steinke Pond. It did not take us long to get there. The parking lot was almost completely empty. A good sign.

I remember nothing from my childhood about 'The Dells,' except the falls, the rushing river, and the rock formations. The parking lot, the outdoor lodge, the picnic areas, and now newly added camping areas were strange and new to my mind and eyes.

We left the car, took the trail to the falls, and began our trek around the area. At this point, everything changed for me. I did not abide by one of my major 'rules,' concerning shooting; Slow down, take your time, observe first, then shoot.

I had a feeling of urgency. Like I was on a time schedule and needed to get it done. It was an emotion of shoot everything you can, get particular, isolated shots, and move on.

It wasn't until later that day when I realized I was in a frenzy while at 'the Dells.' Being aware of my state of mind, I doubted if any good shots might be revealed from my time there.

Looking at my images I feel the need to return. I missed the whole picture. It is not the first time.

After the 'Dells,' Keeffe and I took a break. We had been out all morning shooting. A little after noon we got food, had lunch, and took a well-deserved nap.

In the middle of the afternoon, we took our memory cards and loaded the images into our respective filing systems, and did a little editing. I was partly right about the 'Dells,' images.

Many were not exposed properly. I missed opportunities. A more comprehensive shoot is necessary to capture the many different angles of the waterfalls, rushing water, and the scenery encasing the 'Dells.'

Before having supper we went to Rookery Park on Rib Mountain Dr. Not much happening there. Our final late afternoon stop was Bluegill Bay Park. A Great Blue Heron and a few shots of a couple of Pied Bill Grebes was an excellent reward. 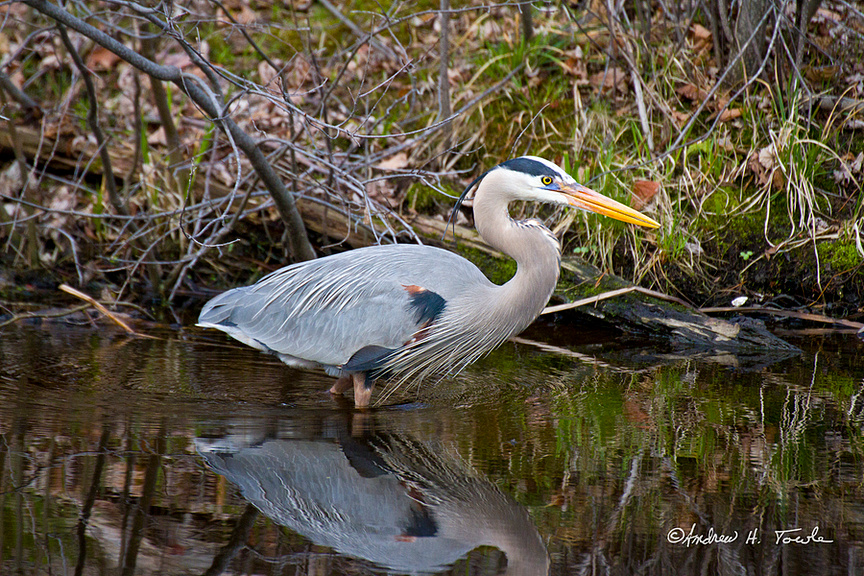 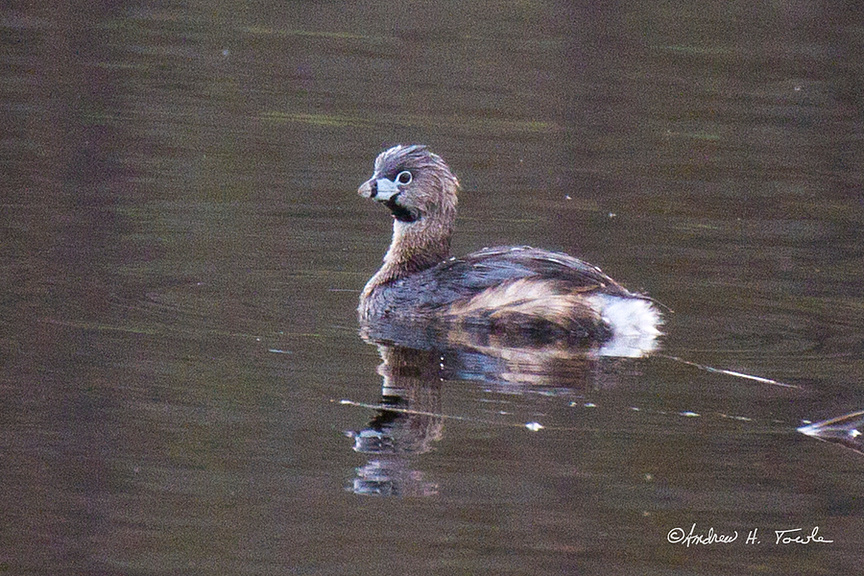 After supper, Dave called his brother Kevin and asked him to come over. Dave still had their dried-out Christmas tree to burn and mentioned to Kevin it is a nice night to burn the tree and eat S'mores over the fire pit. 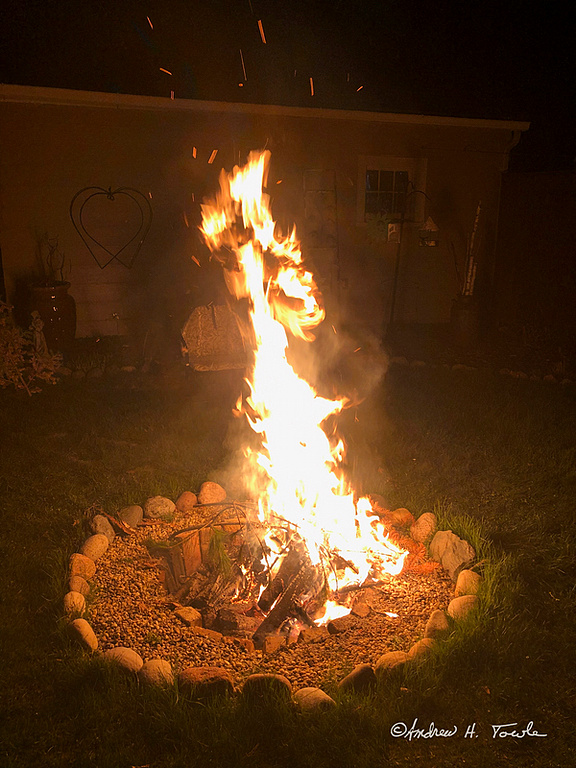 Kevin brought his daughter Elle who had all the ingredients for S'mores. We chatted, burned or roasted, depending on your preference, marshmallows and ate our treats. We all took pictures of the blazing branches of the Christmas tree as it flamed high and crackled loudly. Dave took some nice shots of us as we were standing around. We looked weird in the firelight.

Sunday morning dawned with almost clear skies, a chill in the air, and a wildlife area about a half-mile from Dave and Linda's. Wow, how convenient. It is part of the Eau Claire River flowage coming into Wausau.

It was a great escape into what seemed like a wild area right in the middle of civilization. We followed the trail in and about 200 yards in Keeffe instructed me to go left, as the path forked into two different areas. Shortly thereafter a whitetail deer scampered north without a sound.

We heard and quickly saw a Sandhill Crane circling an area in some distress but the trees blocked any decent shots. We continued on. Eventually, we came to a crossing near a beaver lodge and almost gave up our trek. However, a beaver damn provided a damp crossing point and we took it. 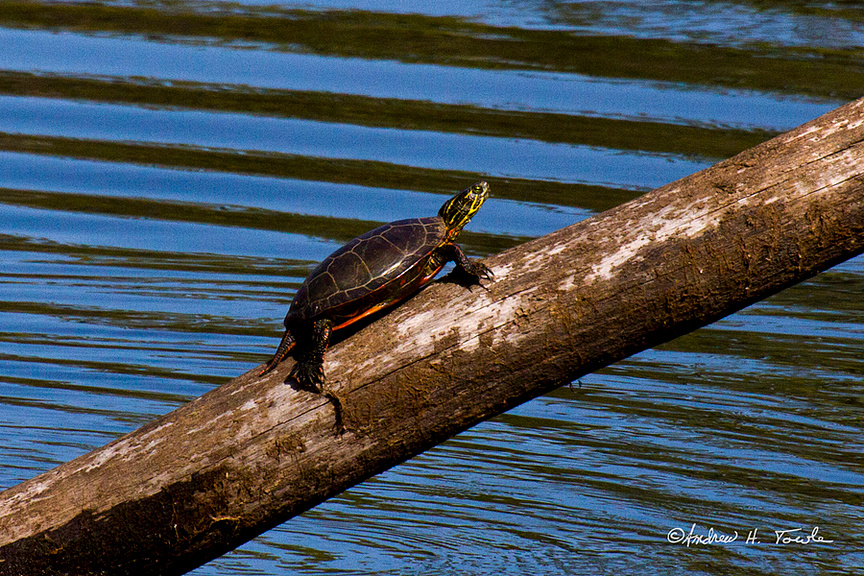 Woodpeckers chasing each other through the trees provided wild entertainment and a few crisp images. As we continued we reached one of Keeffe's favorite spots in this area. From a position by a tree on the bank of the river, one could see the river in a 180-degree arc.

It was a beautiful patch of ground to sit and contemplate one's surroundings. This particular speckle of ground was also an ideal vantage point for many photo ops. We saw another deer here though too far away for a decent shot. At least for me.

On the way back we noticed a Sandhill Crane on the ground where we previously saw and heard a Crane flying around in distress. We took a few shots. It wasn't until later when Keeffe discovered the Crane was standing right by its nest! 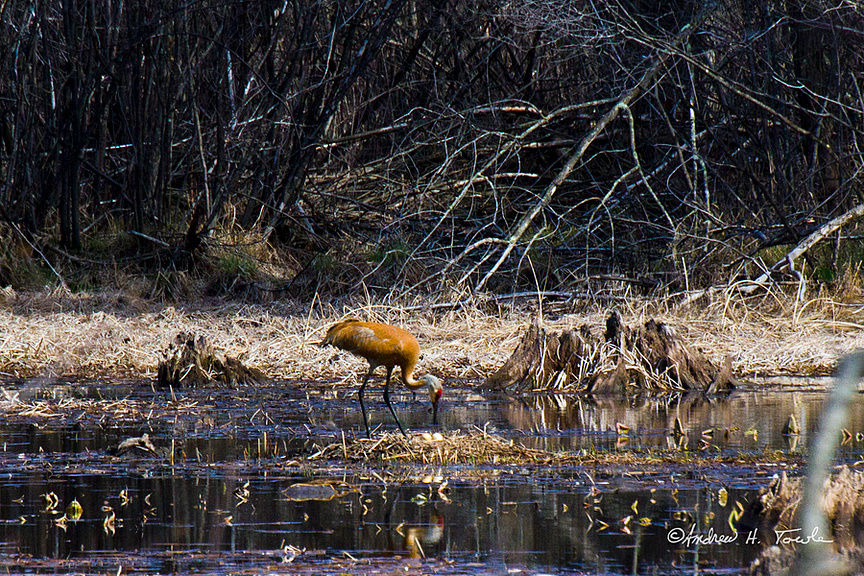 I looked closely at my shots when he announced there was an egg in the nest. My shots revealed two eggs. The Crane had been rearranging the eggs. Perhaps to turn them over to warm them in the sun.

That's called 'an Easter egg;' a surprise treat not noticed until later.

Further, along on our way back, Keeffe recognized a Kingfisher call. We stopped in our tracks and waited. Poof! There it was across the river in a tree where we could see it. We took our shots, crossed our fingers, and hoped for the best. 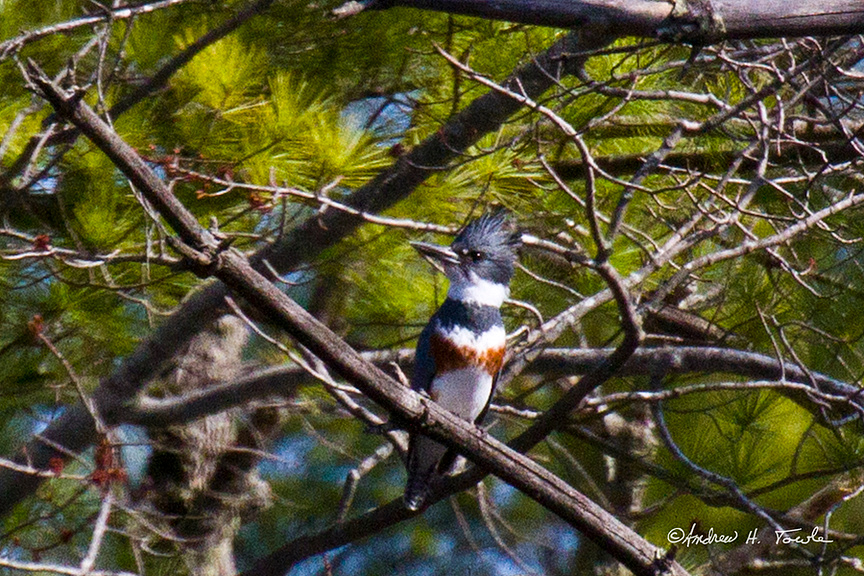 As we were nearing the parking lot I asked Keeffe if he had ever seen any snakes around here. He said no. Ha! Right after that statement a green snake slithered across the path in front of him.

The whole weekend treat for me was more than expected. But then, I generally go into these sorts of things without expectation of 'Easter eggs' or any other kind of exciting surprises. The more you shoot the more opportunities are afforded you.

Andy Towle(non-registered)
I'll say. It was one of the best excursions I've been on for quite some time. Thank you for your knowledge and familliarity with the locations. That knowledge is extremely valuable for future adventures. We didn't make it over to Gleason, we might want to try it out. Visiting your other posts again will probably afford more opportunities also.
Keeffe(non-registered)
One of the grandest photo shoot weekends I will ever remember.
Let's get another one on the calendar.